Honestly, I wasn’t planning on getting out a new post before finishing exams, but I was feeling really inspired in class (or do you call that boredom then…?) the other day, so I finally got around to jotting down notes for this post – about a trip I took at the end of last June. So here we are finally, and now I want to try and give you a pretty close to perfect itinerary for your Gran Canaria road trip.

Gran Canaria is one of the seven Canary Islands in the Atlantic Ocean just west of the North African coast. Although geografically the archipelago belongs to Africa, it’s actually an autonomous community of Spain, which makes

Spanish the official language. Because the islands have reached great popularity amongst Europeans trying to escape cold winters thanks to its year-round spring-like temperatures, other languages such as English, French or German are also common. Each island has a very unique landscape to offer, so whatever your preferences are, you’ll find one that suits you. The reason we ended up choosing Gran Canaria is, that for us, it was the best of both worlds: a beach and pool holiday to relax and party on one hand, and beautiful mountains, villages, and coastal regions to explore. We stayed in Green Field Hotel for eight days in Playa del Inglés which I can really recommend for its price-performance ratio, and rented a car from the airport for two days.

There are always these rumors going around about people under 25 not being able to rent cars, but I can tell you that’s not true. Me and my friend were both 19 at the time, we did have to pay a young driver’s fee (I think about 7€/ $8.50) and only certain vehicles were available to us, but if you’re on a budget, those are usually the kind of cars that you would go for anyway. In some offers, the young driver’s fee is already included so look out for those! So all in all, the search for the most economic deal was a lot harder than finding a deal suitable for our age and we didn’t have any problems. 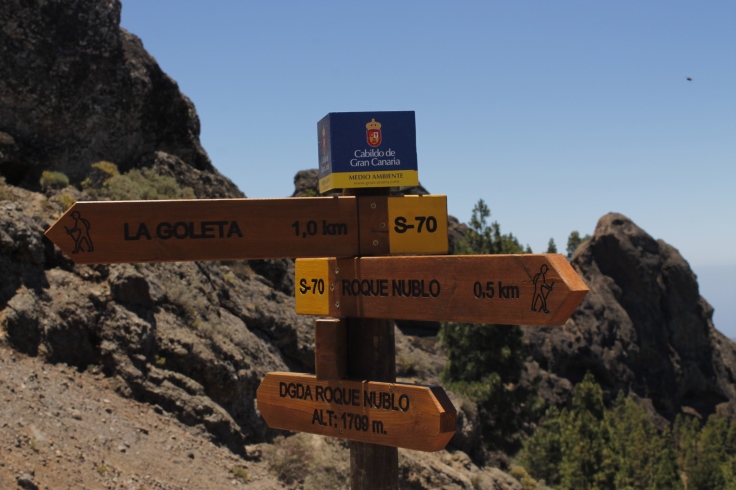 Enough about the basics, let’s get to what you came here for – a guide to an unforgettable island road trip. So what do you need to bring once you have everything else figured out? The list is actually pretty short: a map (yes, we used an actual map, not a GPS or phone! Many guide books actually include road maps which is where we got ours from, but this is a printable version basically identical to the one we had.), an aux chord or speakers that connect to your phone so you can blast 500 Miles, a camera, drinks and snacks, sunscreen, sun glasses, and a change of warm clothes and swim wear. Now you’re all set to go and pick up your rental!

Most agencies are based at the airport, and I’m almost positive that it’s cheapest to rent your car from there instead of taking offers at your hotel etc. If you can, it’s very convenient to combine your road trip with your arriving or departing flight to

save yourself an additional trip to the airport. We had our car right in the middle of our stay, which means we had to take the bus from Playa del Inglés to the airport two times, but it was nice to have time to get settled in first, then explore, and the relax for a couple more days after that. It was also the cheapest time to rent the car and worked best with our flight schedule, but if you have the opportunity to combine it, that’s great. We ended up getting a super gorgeous baby blue Fiat 500 (what else could you ask for if you’re two girls going on a road trip?!), which I was really happy about, since that’s what I drive at home, so it wasn’t a big adjustment. But let’s finally get started!

Stop number one: the capital of Gran Canaria! If you’re up for it, park your car and start strolling through the pretty streets of Las Palmas, but if you really want to get around the entire island in one day, I say skip this part and come back another day for a more relaxed shopping and sightseeing trip. You can always get there by bus and it’s easy to lose track of time, so it’s probably best to just drive by and head on to your first highlight of the trip!

Oh, Arucas. That’s where we almost got hit by another car (within half an hour of picking ours up…) because the driver wasn’t paying any attention and cutting a corner, and where I almost didn’t get the little Fiat up the very, very steep, and very, very narrow streets. (Side note: you’ll be going up a lot of steep roads on your trip, as you’re after all passing through the mountains. We did always manage in the end with the Fiat, but maybe that’s something to consider when choosing your rental car.) But it was worth when we got the top of Montaña de Arucas with a beautiful view. Unfortunately, it was a bit rainy and foggy, so we didn’t stay too long, but it’s still a nice spot. 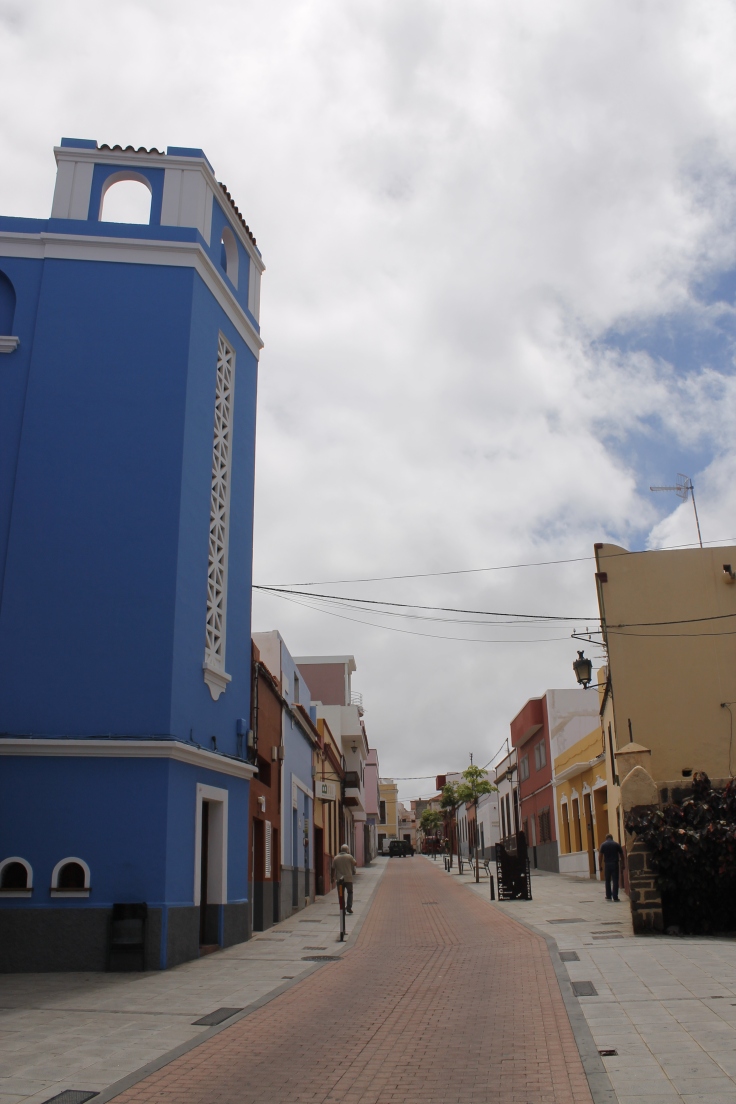 Now Gáldar was a real gem. Luckily, it had cleared up already until we got there and we were able to find a cheap parking lot and go out and explore. The houses are adorable and colorful, but just see for yourself and you’re not going to want to miss out on this! 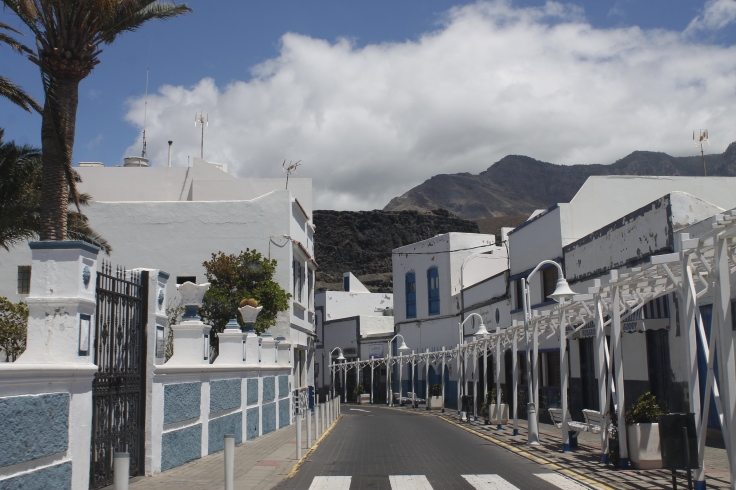 Agaete is another lovely town right by the coast with mainly white houses, which makes the community as a whole look so pretty. From the harbor, Puerto de las Nieves, you can even catch a ferry to Santa Cruz de Tenerife. If you didn’t forget to bring your swim suit and it’s not as windy and chilly as it was when we went, enjoy a bath in the Salinas de Agaete, natural swimming pools right by the ocean. 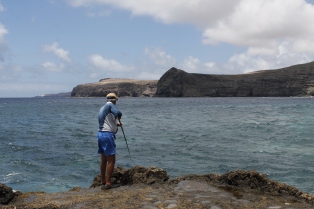 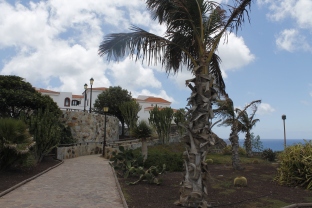 Upon leaving Agaete, the freeway immediately turns into a winding road, but it’s also one of the most stunning views you’ll get to enjoy on your entire trip. The reward for the difficult driving conditions is your next stop: El Mirador del Balcón – the balcony viewpoint. This is definitely a must-see for any Gran Canaria road trip and should immediately go on your list! 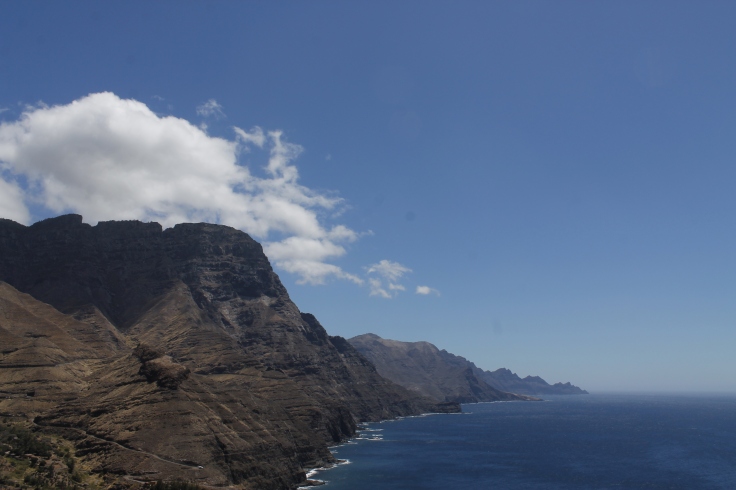 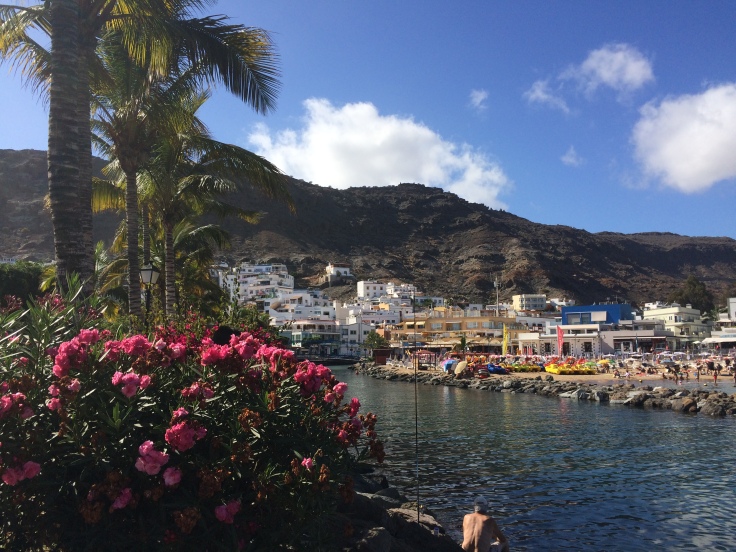 As for #7 and #8, we only passed through them, but if you want to get out of your car for a bit or grab a bite, feel free to do so. We really wanted to be in Puerto de Mogán on time for dinner and then catching the sunset, as we had read it’s the best place to do so on the island. This little town was truly enchanting and probably my favorite. Everything about this place is so beautiful, I don’t even know where to begin, so I’m just going to let the pictures speak for themselves. We took a little walk around the harbour, strolled through the shops, and climbed up to the mirador (viewpoint). As we weren’t able to the see the sunset from there, we headed back down to the harbor and waited to see the sun disappear behind the ocean from there. Spoiler Alert: Tenerife is acutal in the way of the sun as it disappears behind Teide mountain, and not the sea. Nevertheless, it was still beautiful and we were able to see the silhouette of the island. 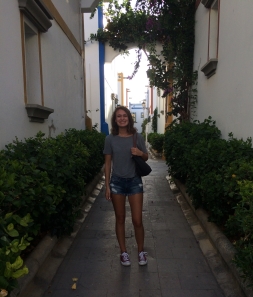 As it was getting really dark, we only made a quick stop, as we had heard Amadores Beach is said to be the prettiest one on the island. Of course, it was a bit hard to tell in the dark but it did look like a nice spot to swim, I can imagine though that during the day it gets very touristy and crowded, as the entire town it’s surrounded by is clustered with huge, luxurious looking hotel complexes for all-inclusive guests.

From there, we headed back to our hotel in Playa del Inglés.

On day 2, there are going to be mainly windy mountain roads. But before we get to that, our first stop before heading inland are the famous sand dunes. As Maspalomas is right next to Playa del Inglés we decided to do that first thing in the morning. We had a lot of trouble finding a place to park though, and by the time we got there, the dunes were already pretty crowded, so I suggest you get there very early if you want some peace and quiet. The dunes right next the ocean are beautiful though so it was still worth the stop! 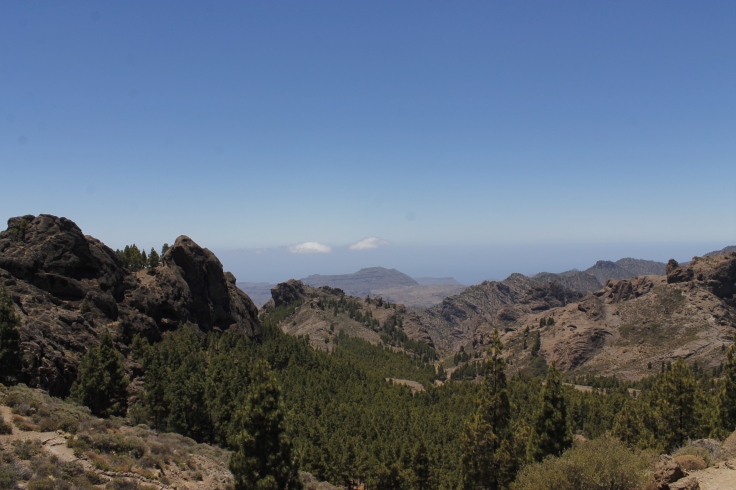 For the short hike (about 30 minutes give or take) up to Roque Nublo from the parking lot, you’ll want to bring a sweater as it can get quite windy and therefore chilly. It’s not a difficult hike and we had no trouble making it to the top in our converse and jeans shorts, so you don’t need to worry about not being fit enough or not having brought adequate clothes. The surrounding landscape and the views from atop are stunning, and it’s really nice getting out of the car and being physically active after having spent a day and a half mostly driving around already. 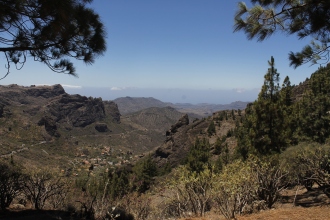 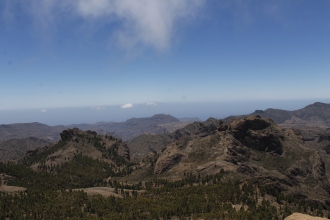 This little town is a very cute stop to maybe get a little something to eat after your hike. Unfortunately, we weren’t so lucky with the weather, so we didn’t really get to spend a lot of time there. 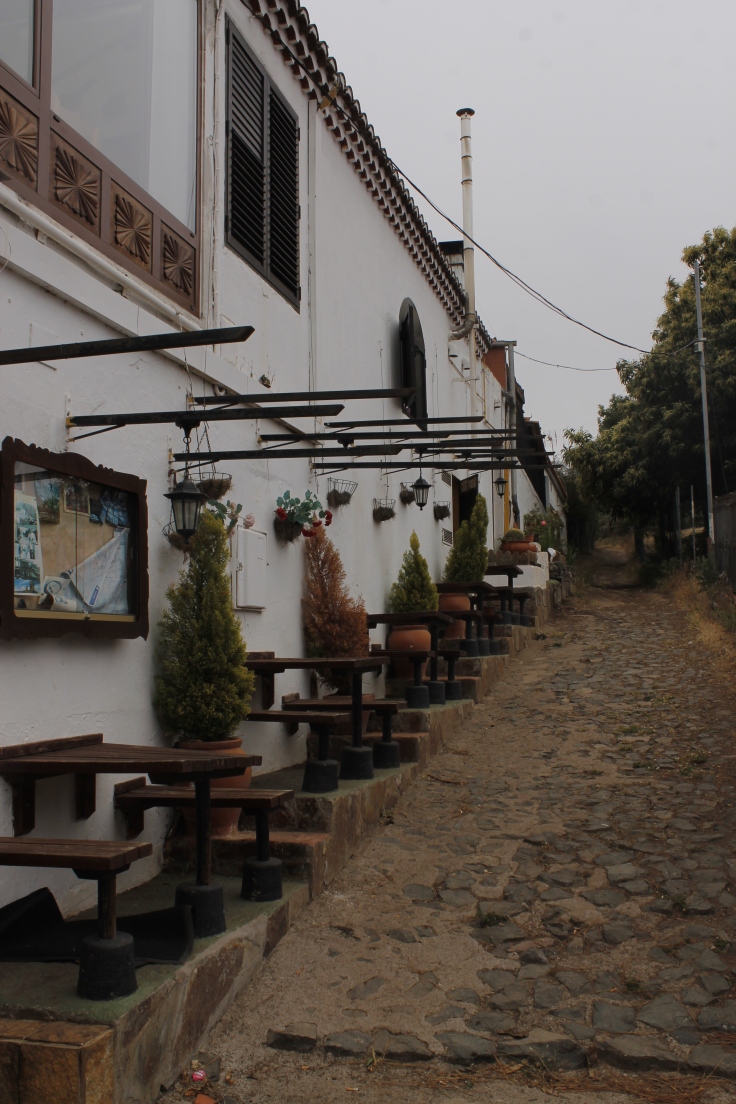 As you head towards Telde and the east coast, you’ll pass by Gran Canaria’s highest mountain (1.949m / 6,394ft), so make sure to look out for that.

At this point, I was feeling pretty drained from driving all day and having to concentrate so hard because of the curvy, steep, and narrow roads, so this adorable town came at the exact right time. We still had some time to spare before having to return the car to the agency at the airport, so we just took a moment to sit by the sea and watch all the surfers, before we finally had to say goodbye to the cute baby blue Fiat

I hope this guide was somewhat helpful to you if you’re planning a Gran Canaria road trip of your own. In less than a month I’m finally leaving for my first big trip this year to Michigan and Florida, and then I’m going to Berlin for a couple of days. In the meantime, I’m going to work on a Copenhagen guide and Bolivia round trip, and planning the rest of my travels this year, so stay tuned! 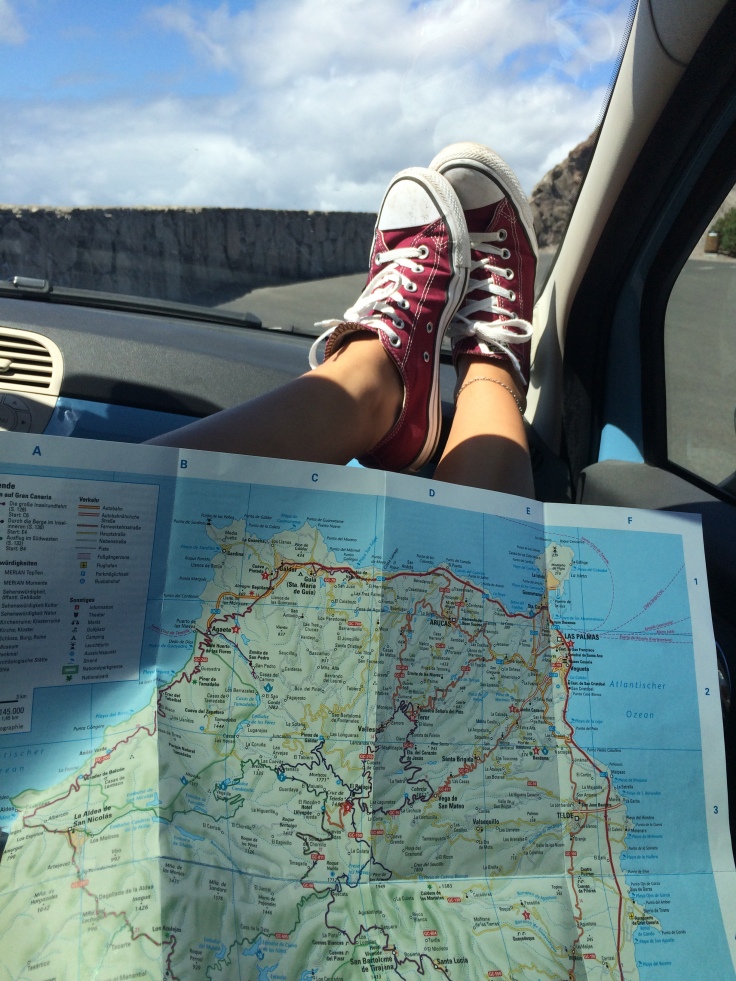 You’ll need coffee shops and sunsets and road trips. Airplanes and passports and old songs and new songs, but people more than anything else. You will need other people and you will need to be that person to someone else, a living, breathing, screaming invitation to believe better things. 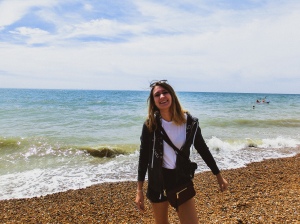 I’m Fee and I travel the world with a camera constantly around my neck. You can find the results of that on this blog where I write about my experiences on the road all while trying to live sustainably.